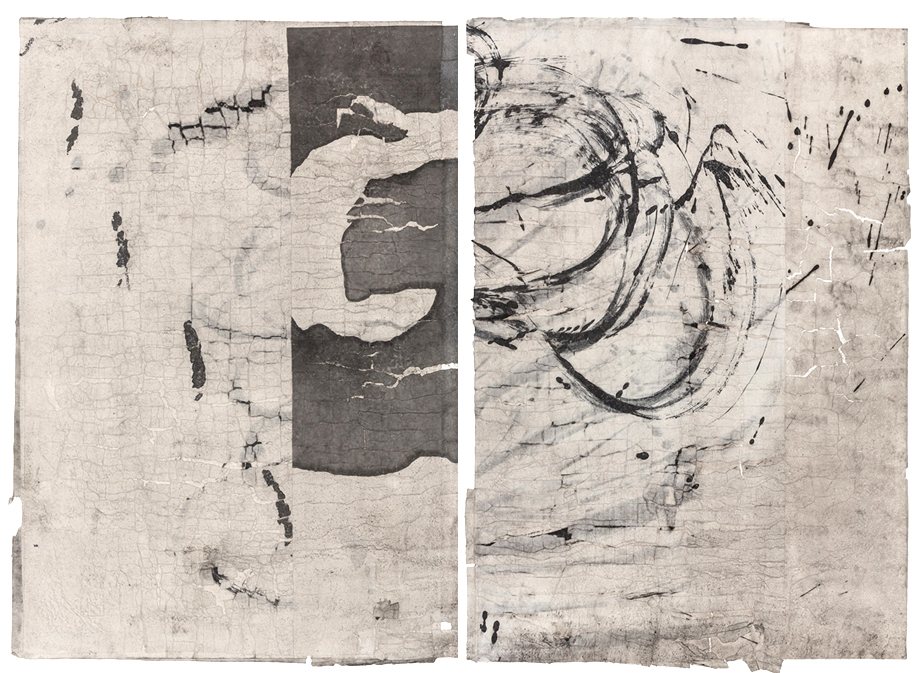 The images of art are symbolic objects because they themselves are that which they show, and conversely, because they transform that which they are into an act of showing – a showing of something, and at the same time a showing of themselves. This junction of showing and being occurs because artistic images are structures of action. The actions that produce the artwork are at the same time actions that the artwork exhibits by presenting them as part of itself as a trace. This is particularly true since artistic modernity broke with the illusionism that, in traditional art, hid the mediality of the artwork itself beneath the act of showing something outside the image – the “outside the image” that, according to the famous Renaissance metaphor, became visible through the “open window” of the image. The modern re-foundation of the image as the junction of being and showing, which closed the “open window,” has far-reaching semantic consequences. If in traditional art was primarily a matter of recognising the thing shown in its layers of meaning – as is reflected in all the complex iconographic commentaries via which such artworks are decoded – art is now less concerned with understanding the thing shown, but showing itself and hence the structure of actions that, in the modern artwork, is both a physical and a symbolic occurrence.

Raabenstein’s pictures are pertinent examples of such an action-oriented semantics, which subordinates representation to production. To understand his pictures means, above all, understanding the logic that underlies the complex process, stretched out in time, of their production. When Raabenstein, after a decade in which he concentrated on music, returned to painting he turned to a procedure whose delicate technique he has acquired with increasing virtuosity: Japanese calligraphy, which construes the mixed form of writing and image at which calligraphy aims in the direction of an expressive gestural action and hence connects the writing (or imaging) act to the body. The spatial aspect of Raabenstein’s pictures did not first appear in the palimpsest-like layering of sheets of paper, which we will go on to discuss, but is a substantial element of calligraphic technique, since the gesture condensed in a two-dimensional mark on a sheet of paper is itself three dimensional and plastic: it is only through the extensive and dynamic motor activity of the body that the sometimes impressively large paintbrush with its soft, ink-soaked hair is to be controlled. The techniques of calligraphy also lie behind the washi paper that Raabenstein uses, whose sizes reach up to 70 x 200 cm – the largest size that can be controlled within a single swing of the body and hand. The deposit left by the gesture on the paper, which for the calligrapher is the goal of his action, is for Raabenstein instead the origin of a pictorial process that reaches far beyond it. Painting with the body and a brush is only the first step, to be followed by a good number more. We could refer to these steps, by analogy to painting with a brush, as painting with paper. 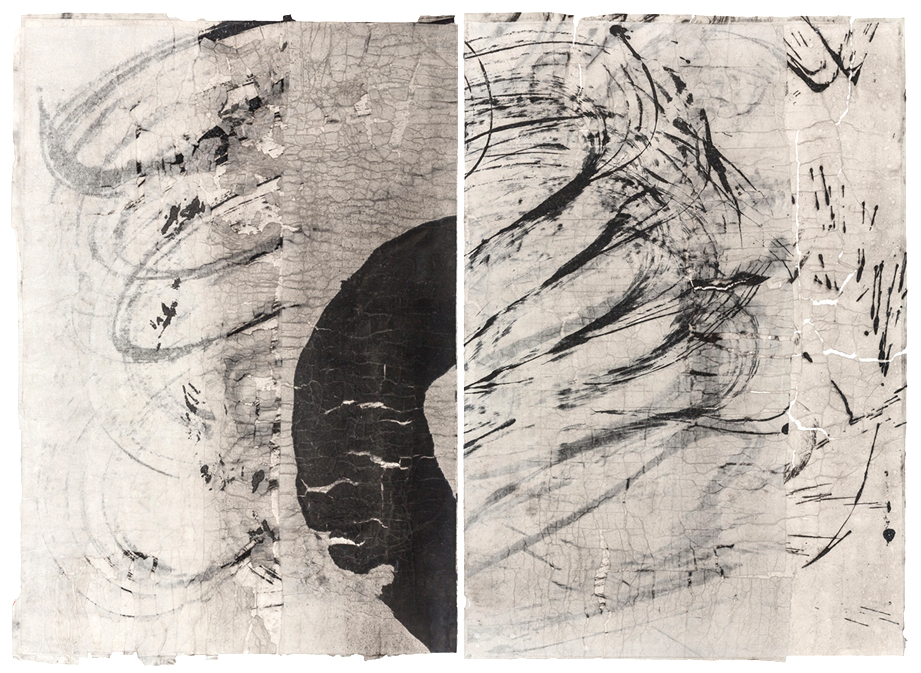 In the additional steps of this process Raabenstein produces an irritating pictorial ambiguity – indeed, on many levels. Whilst the initial gesture represents a positive creative act, which furnishes the still disoriented white area with an internal power of direction, the subsequent operations are characterised by a strange mixture of positivity and negativity in the way that the creation and dissolution of forms overlap each other. Raabenstein divides the large sheets of paper with their expressive calligraphic figurations into two parts, which now serve as a material basis from which he assembles a new constellation upon the foundation of a canvas. The calligraphic gesture is broken, but at the same time, this fracturing releases formal potentials that can be realised in the new constellation of fragments through the flashing appearance of formal resonances, reflections and antagonisms. In the collages two observational and interpretative perspectives tip over into each other in that we can understand them both under the aspect of fragmentation of the original form and of emergence of a new form. This change of aspect is further dramatised in that the concept of form is re-determined here: in the first case, form is the result of an expressive, pre-reflexive bodily act; in the second case, form is the result of a careful process of composition. Raabenstein nonetheless makes the separation between these two different formal processes unclear, in that several instances of sticking washi sheets to the canvas overlap and new brushwork intervenes between these acts of overlaying, with the consequence that, whilst the pictures push their process of creation towards the outside, they at the same time prevent its linear progression from coming clearly to light. Rather, the succession of the picture’s formation becomes a shimmering simultaneity.

The polarity of black and white, the tension between which is the foundation of Raabenstein’s image world, is reflected in numerous pictures in that the montage carried out on the canvas constitutes the diametric opposite of the primary calligraphic act. Whilst the latter begins with the shining white paper, on which black ink is placed, Raabenstein primes the canvases with thick, black aircraft coating, which through a clear matt varnish coating appears even blacker. In the finished pictures the striking play of the black–white polarity results in an ambiguous, purely optical and hence unarrestable spatiality. Ink markings lying deeper shimmer through the sheets lying over them, at the same time lending them a slight grey tone; overlapping sheets produce lighter zones; places where the prepared canvas is uncovered, or almost uncovered, appear correspondingly darker – and so on. Exactly these possibilities of emphasising something by not covering it, or by allowing striking forms to appear through the tearing of paper in the process of attaching it, show the entanglement of positive and negative procedures mentioned above. In this way the images allow an overall figuration to emerge that oscillates between intention and chance, since intentional acts of consciousness and material processes overlap in such a way that the borders between them become blurred. The image’s promise of homogeneity is counteracted by the ineradicable heterogeneity of the forces at work in it. 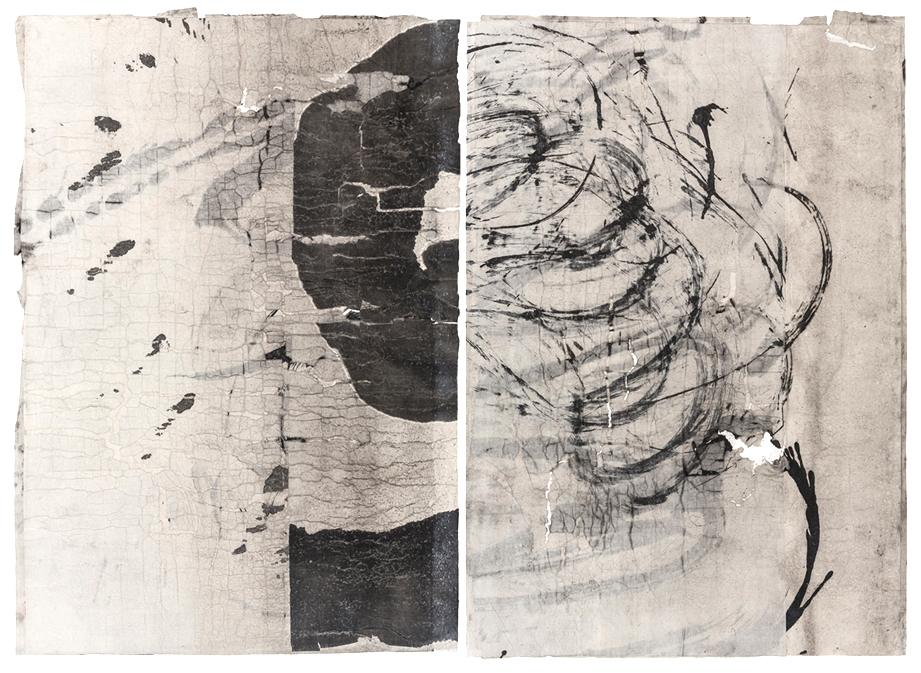 Just how multifaceted and semantically variable Raabenstein’s ambiguous structures of action, using all possible means to attain oppositional effects, are is shown by the role played by grids in the pictures. In numerous works equally sized fragments of proportional surface geometry are arranged in a correspondingly regular fashion on the canvas. In this manner Raabenstein emphasises the moment of fragmentation against the moment of newly emerging figuration, since a grid – to take the terms of Gestalt psychology – does not produce only one weak, formal coherence, but also suggests that we could, by rearranging the pieces, potentially rediscover the original figuration. This becomes most explicit in the independent series of pictures that consist of slender, vertical strips strung together, in which a paper shredder was used to cut up the ink drawings fed into it. The fixing of these strips in a random order on a paper or canvas base produces the effect of a picture puzzle in which we instinctively search after the original forms. However, the more the grid effect retreats into the background and gives way to a freer arrangement of the fragments, the clearer is the articulation of another, stronger moment, establishing (again to take the terms of Gestalt psychology) coherence: the figuration that begins to be produced from the individual elements and the gestural energies stories in them and which moves beyond the boundaries of the fragment. As a result of the grid procedure the moment of fragmentation comes to the foreground and the more open arrangements weaken the moment of division in favour of a secondary form that, in its positivity, triumphs over the negativity of fragmentation. The diversity of the two procedures is intentionally overstated here; the pictures themselves show finer degrees of scale in the balance into which these two moments are brought. Nonetheless, a fundamental difference is at stake in the question of whether Raabenstein’s pictorial process primarily appears to allow form to vanish in the grid of fragmentation, or if form appears as something that rises like a phoenix from the ashes of the initial destruction of images. It is hence significant that Raabenstein’s pictures can be read in both ways.

In the pictures where the grid moment becomes weaker, in favour of freer arrangements of fragments, “painting with paper” comes to the fore – that is, all the activities involving the gluing, mounting and overlaying of the paper fragments, and allowing them to tear in a calculated manner – a gestural dimension equal to the expressive act of calligraphy. The two pictorial processes now work less against each other than symphonically. By allowing montage to gain form-creating power in this way, the gauge now rises on the other side, as is shown by Raabenstein’s affixing much larger sections of the original calligraphies – and hence larger gestural arches – to the canvas without cutting them up. Nonetheless, however the individual results, very different in their details, may be, the same pictorial understanding remains that sees the balancing in one picture of counteracting processes that place each other in question and are irreconcilable. At the same time, certain works make room for a tendency that allows their fundamental impulse to flash to the surface in an unmasked fashion – the impulse, in spite of all challenges, to allow a great figure to emerge, in spite of all doubt to complete a significant gesture, in spite of all restraint to confront the viewer with a decisive act of expression. 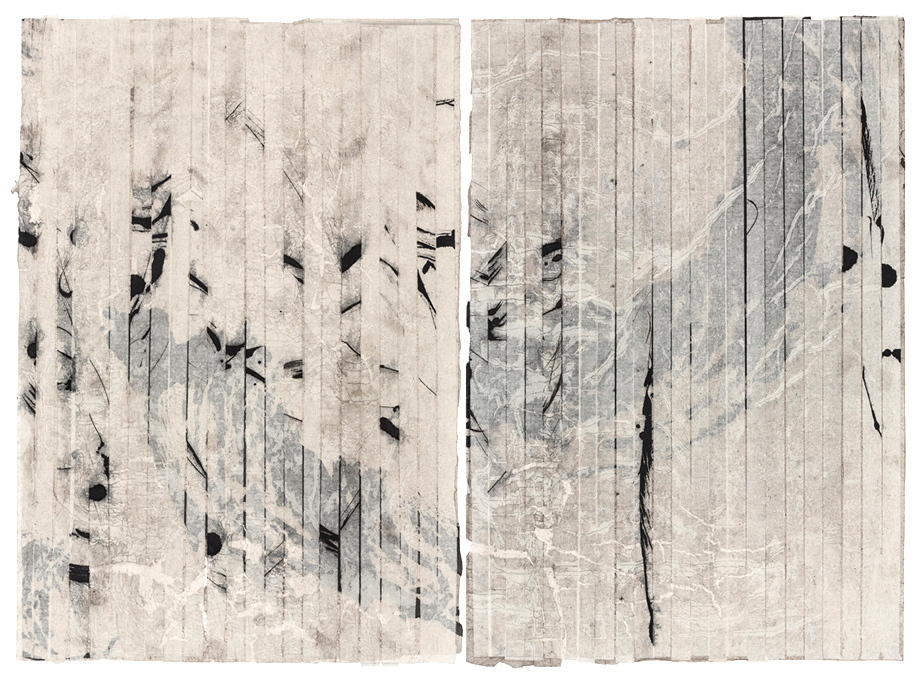 With these last remarks we have reached a point from which we can return to the beginning. The structure of action from which Raabenstein’s pictures are derived thus primarily produces symbolic objects, since this structure of action isn’t an external procedure of merely technical craft. Rather, its exteriority is an interiority turned to the outside. The picture, as the medium lying between these two, is like a membrane in which interior and exterior, personal and foreign, spoken sense and dumb matter, and intention and external obstacles touch. Here, intention and material processes do not stand in a cause–effect relationship, but rather are inextricably interwoven. This interweaving is intended, recalling the opening discussion of the logic of modern art, to make the structure of action of the artwork into its actual content. The inner and the outer join in an act of production that, like the concept of ‘writing’ within literary studies, can be understood as an écriture – that is, as a production, the point of which is to settle at the interface between material and consciousness. This écriture becomes the actual expression of art – an expression that can hardly be fixed, since the process stands above the result. Precisely because no result can appropriately capture this process, repetition becomes a substantial part of modern artistic procedure and the concept of écriture indicates that this repetition can hardly be separated from self-repetition. In this respect Raabenstein’s pictures form a single, long and fundamentally incompletable current of images. Each new picture, which just as much refers back to the previous ones as it searches for new pictorial solutions, demonstrates both the specific material logic of the painter’s profession and the desire for expression. Above all else, however, each picture demonstrates anew how, although both have been woven together, they never merge into one. This ineradicable ambiguity is the restlessness within the clockwork of Raabenstein’s art.