dialectic of the image boundary

we could talk of a kind of grisaille in raabenstein’s painting. If earlier works were kept monochrome, containing a single figure locked into the image by layers of shellac, such compositions have, in the last ten years, retreated into the background in favour of another pictorial method. paper and ink have become the preferred material of artistic activity. this was accompanied not only by a renunciation of colour but a noticeable dissolution of figure that continually recurred in them. the figure: more a kind of encoded face than a head, inhabiting the images like a ghost – locked in beneath layers, no longer of varnish but of paper. the disembodied figure, reduced to pure facial expression, which in sheer endless productions of serial creation questioned, rather than confirmed, existence as a brief flash, retreated in favour of the painterly gesture, in which it can at best only occasionally be divined. the direct twin-like qualities in the images gave way to the fragile establishment of a subjective claim through artistic action. expression hence no longer shows itself in reproduction but lies in the line itself, which immediately and irrevocably is thrown onto the page.

japanese ink drawing, which raabenstein employed, demands a great deal of artistic competence, since it is not only necessary to guide the materials securely – the occasionally heavy brush or even the broom – but, above all, to clear the way for the impulse of the unconscious. the expression of the gesture is hence always self-expression. the success of transcription always contains within itself the danger of failure. the constant search for existence in the faces of the earlier works was consolidated into an existential act in front of and upon the paper.

ink drawing invokes the diagram-like qualities of black-and-white, as well as the calligraphic element of writing upon paper, which is always a self-inscription. both appear correct and yet are only a part of what constitutes raabenstein’s works and allows them to become pictures. diagrams and calligraphy live from the contingency that arises from the relation of figure and ground. ground means the paper on which something is composed that, by being contained by the white of the paper, can come together in a figure, leaving a ground surrounding it. in raabenstein, on the other hand, it is always a matter of space, which noticeably becomes a resonance chamber – something that clearly owes to his lengthy switch from visual art to music. in the early works the enclosure of the image is achieved by the layers of shellac that give the figure on the coloured ground a space in which it is, in a sense, enclosed and thus secured and annulled. through the use of other materials, first of all paper, another method of securing space becomes widespread in which the principle of layering persists but is handled differently. the three-layered superposition of ground, figure and enclosure becomes a layering of different sheets of washi paper, which are sometimes attached to cardboard, sometimes to primed or unprimed canvas.

the washi sheets are glued together with clear acrylic binder. this penetrates the paper, however, and alters not only one sheet, but all that are laid on and over each other simultaneously. the layering thus becomes at the same time an interweaving of different grounds. the form in which the papers are applied contains the possibility of tearing or plication – chance and danger hence become constitutive elements of the production. the process of gluing together also makes possible the intentional use of supposed errors; tears and folds consciously become compositional materials. craquelure appears and sometimes openings break completely free, allowing what was covered underneath to rise to the surface. the different layers of the image begin to shift visually. it is also impossible to calculate the reaction of the combination of ink, paper and binding acrylic. the acrylic soaks the washi sheets, the ink penetrates the layers. the paper appears to be dyed, traces of ink are absorbed and spread out. the form that appears draws life sometimes more, sometimes less from the grey tonal values that arise through the process of layering and gluing and which lend the works a vague depth. in its vagueness, the image space that arises rapidly alternates between being more and less defined and sometimes suggests additional depth so as to edge its way to the surface in another place.

this play of brighter and darker colours, droplets and gestures in and on the weaving of the paper produces the grisaille. since the middle ages grisaille painting was primarily used in order to achieve, by means of grey shading, a terse, plastic form on the picture base that, through the effect of light and shadow, became an illusionistic imitation of stone. imitatio is far removed from raabenstein’s work, but the production of depth and height, light and shade – and hence space – through the distribution of grey tonal values is intrinsic to his pictures. the greatest sharpness of detail from the grisaille painting of the late middle ages is transformed into its opposite: blurring and obscurity arises. in addition, grisaille was frequently used as underpainting in order to prepare the distribution of light and dark fields in paintings. in raabenstein, on the other hand, it is neither under nor overpainting, but rather a kind of inter-painting, through which the different layers are brought to one another. through the series of canvasses, primed in black with aircraft coating, the play of light and dark that takes place acquires a trenchant potential. 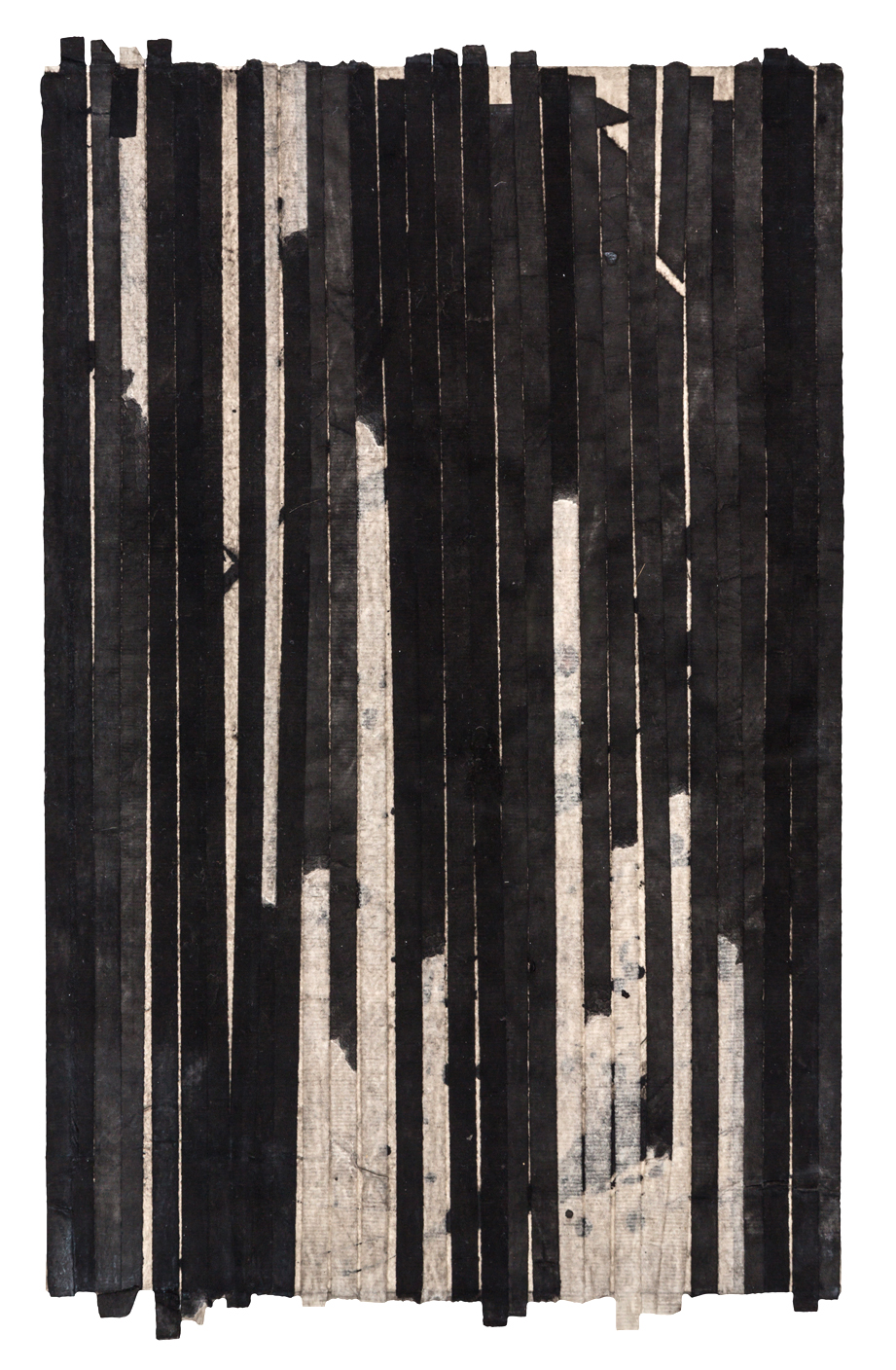 additionally, it should be noted that grisaille painting was used by northern artists in the fourteenth century for outer altar wings – that is, for the sides that were visible in everyday life. two saints collide on the locking edge of the altar. raabenstein also allows his images to collide, or at least to come together. alongside the diptychs and triptychs into which he frequently arranges his works are foldable four-part polyptychs that can be opened and closed in different ways, as well as other combinations. in contrast to the altar wings, however, the borders of the image are abolished, so that the positioning of elements next to, towards and on top of each other is always an expansion of one into the next. a correspondence arises between the individual panels, which in turn come together in a unified image. here the outer borders of the whole appear completely temporary, and could in turn be annulled by attaching further elements. this opening of the image boundaries outwards creates, paradoxically, a closing of the individual elements inwards.

the potentially interminable nature of the images, which is also shown in raabenstein’s works in series, is confirmed even further by the fact that new images literally arise from old ones. the created work becomes the foundation of the yet to be created. raabenstein cuts up his paper works and adds the materials obtained to new pictures. the supposed act of destruction hence becomes an act of production. the definitive gesture, fixed on a single sheet of paper, becomes a fragment of a momentary act of artistic relinquishment, brought together with other such gestures made with other sheets. the encounters of the artist with one sheet of paper become, in the mounted sheets, the encounters of these encounters. the status of the artistic act and the temporality formalised by the sheet of paper are annulled in the mounted work by being expanded at the same time. through the combination of the sheets of paper the times inscribed in them are combined and now form an indeterminable continuum. raabenstein takes the dismantling of the individual sheet so far that he sometimes leaves the task to machinery. the paper shredder – guarantor of the destruction of evidence, both personal and official – turns the composition into a composite of slender strips. these strips are then laid edge-to-edge as the smallest elements of former pictures so as to produce a new image. as was shown in the polyptychs, one image merges with another, going beyond its boundaries, and is totalised here via consolidation into a single work. 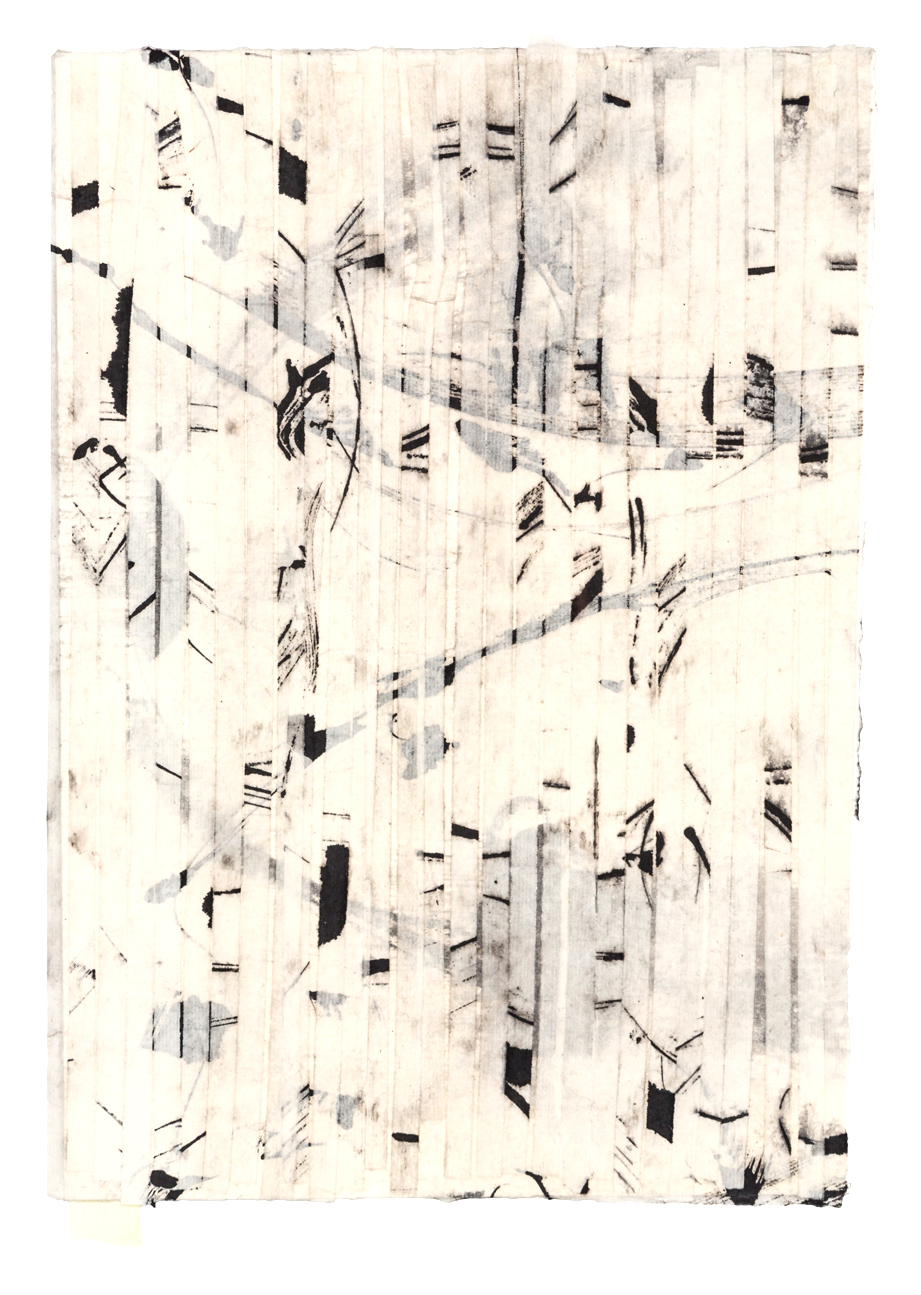