rvk – you turned your back on the art world for many years. what were the reasons for this?

raa – i did not abandon the art world in the classical sense, i felt that the prescribed paths were somewhat boring. i had started to exhibit in the security sectors in the mid-nineties. the spatial occupation and the artistic possession of these areas, through the presentation of my work, raised the eminently interesting question of the value and availability of art. disinvitation cards informed the public of the location, time and number of exhibited works. because private persons were denied access to these areas, those who had been uninvited had to visualize the exhibition for themselves.

raa – ‚pioneering security‘ was an unequivocal success, however in unexpected areas. even the first of these installations lead to a physical confrontation, the doctors in a berlin hospital were in total disagreement about the works presented in the operating theatres. the works were unceremoniously removed after a brawl in which some of the works were badly damaged. the logical conclusion to this reaction were the ‚pioneers security‘ actions, the security of the pioneer was assured by sealing the work in a box. cultivable land, bookshelves and industrial production sites were conquered by installations of these boxes. this series would be no longer possible today after the events of the 11th of september and the resulting security measures. for example, a metal box with contents unknown to the company directors of mercedes benz ag was encased in the concrete fundaments factory hall under construction in their main factory in sindelfingen. this would be totally unthinkable today for the reasons given above. the ‚engineering security‘ project forms the third part of the security series. a virtual security area was constructed together with arup and archimation in one of the houses under construction in potsdamer platz in berlin. the bureau of sir richard rogers provided the requisite plans. my exploration of artistic media had thus come to its conclusion, there was no going back to hanging art on walls in conventional locations. so i started to look for other media.

rvk – you compose music, write about it and are in charge of numerous radio programmes. how did that happen? and why did you decide to return to making art?

raa – i founded a music label in 2001, nonine recordings. the digital possibilities to rework originally dissonant elements until these form a new, intrinsically harmonious work, was very inspirational. beyond that, the pronounced tectonic structures of the music programs, the work with rasters that could be turned on and off and the resultant possibilities on the interlocking striation were formative when i revisited my visual work. writing about music for magazines and designing radio programs was an obvious consequence. particularly the work on the programs then lead to a certain digital weariness that i could eventually no longer suppress. i had an irrepressible urge to dirty my hands again.

rvk – the grids in your work result, therefore, from your interaction with music? how do you convert this experience into pictures?

raa – i started to work with pictorial materials again in 2009, the rasters were not part or the process at the time. the focus in the ‚chess‘ and ‚rome‘ series was more on understanding the designing of space, obtaining a feeling for the material and, above all else, to get my hands moving again. i had initially only worked in pencil or in graphite, which were rigid, massive tools which left spatially limited traces. i started to work with markers, but that struck me as too limiting in the long run. the change to paintbrush, above all, with quick-drying ink, was crucial, accordingly i began to experiment with chinese paper. partitioning this paper in small segments and mounting these on existing forms was initially a random product, prompted, however, an association with the rastered layers in my musical work. these parallels create a particular levity. furthermore, the segmentation offered the perfect opportunity to give the very limited pictorial depth of ink drawing an additional layer. the break of the pictorial gesture at, and through the raster came by itself.

rvk – you talk about a breaking of the attitudes, why do you seek this break in the two of your main pictorial elements, the human body and the calligraphy/movement? are the two mutually dependent and lead to the source of your pictorial invention?

raa – i have been working since my beginnings in the eighties on a figure that has no individual human traits, a sexless child/geriatric. there are two ways to experience this world, some see the world as an arrangement of color surfaces, the others see the lines that border these surfaces. i belong to the second group, and it is normal for me to express the figure as a simplified, gestural line. with the change to paintbrush, the line encompassing the figure dissolves in favor of a more open, uninhibited form. the figure does not remain within itself, it develops into a space-consuming gesture. the skull form remains as an entry point, the door in an otherwise hermetically sealed house, which i consider as purely abstract works. with or on it, whether as human, animal or as armor, the viewer is given the possibility of a forensic reconstruction of the idea of the picture. taken together, the break of the image field through the raster, the splitting of the figuration in its individual elements and the fragmentation of the artistic gesture provide an archeological expanse of rubble in which one can, so it is intended, passionately rummage.

rvk – in your latest works, the grid is increasingly disbanded through surface structures, which comprise an even more dynamic painting style. what importance do surfaces have in your painting?

raa – ink is a material that can be reapplied on the image carrier. this phenomenon is not the primary motivation, but in its application an increasingly exciting field for artistic experimentation. some colleagues have thus quickly gained access to their artistic expression, remaining in the field for their entire career. that is a commendable attitude for the art market, for my own creative process it is extremely boring. i must try out new techniques, progress, once i have completed a series and think that i have understood the creation process. the layers in my work have become more multifaceted over the years. i have no longer as much respect for that which already exists on the picture as i did in the past. now i tear open the lower-lying layers of paper with my tools more often than i did in the past. this releases old layers of ink which appear as patches of color on the picture surface. this can, on occasion, superpose the patterns that have been created by the mounted paper formats. i only use pure, black ink. all grey tones that are in my work are a result of the paper layering or through the etching of my materials. the structures you mention emerge during the entire work process. what is most important to me is that the generation appears organic and not contrived. the emergent haptic quality is obviously subordinate to the composition, should one part be reworked, then the other parts of the raster change as well. the raster is helpful as the entire picture has already been divided and the newly created segment, even if clearly distinguished through brightness and composition from its immediate surroundings, can be wonderfully integrated through the appropriate adaptation.

raa – life itself is, in its limitless diversity, uncontrollable, how could one want to attempt to counter this in one’s artistic work. it is all very dependent on the individual character, there are those who need to retain the explicit control over everything. i am not susceptible to this delusion of control as i am too disposed to playfulness. though i also use a certain fixed frame of reference, through the use of a slowly changing, otherwise clearly structured work processes, some aspects of the picture composition simply unfold, an organized chaos, as it were.

rvk – i used the term painting in the last question. your modus operandi is, however, difficult to categorize: is it painting or drawing or calligraphy? what you think of these categories? how would you characterize your work?

raa – my works are hybrid, they draw on all the mentioned categories, it is precisely the room between these three areas where something personal is created. this surely contributes to the irritation associated with the appreciation of the work, but why should the viewer not have to work a little bit as well? 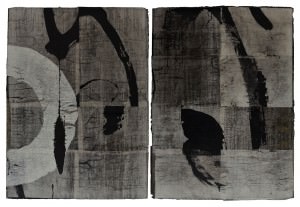 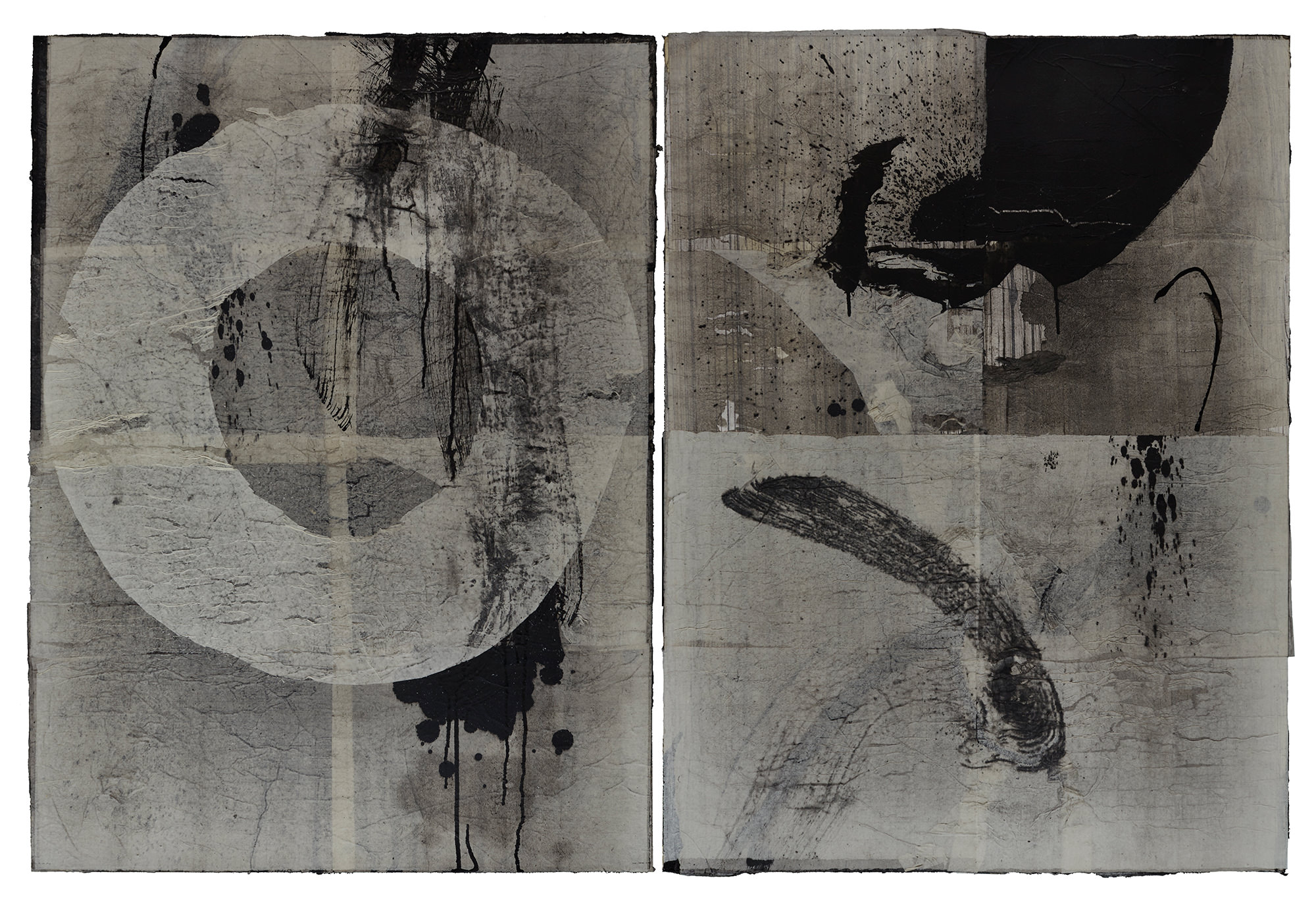 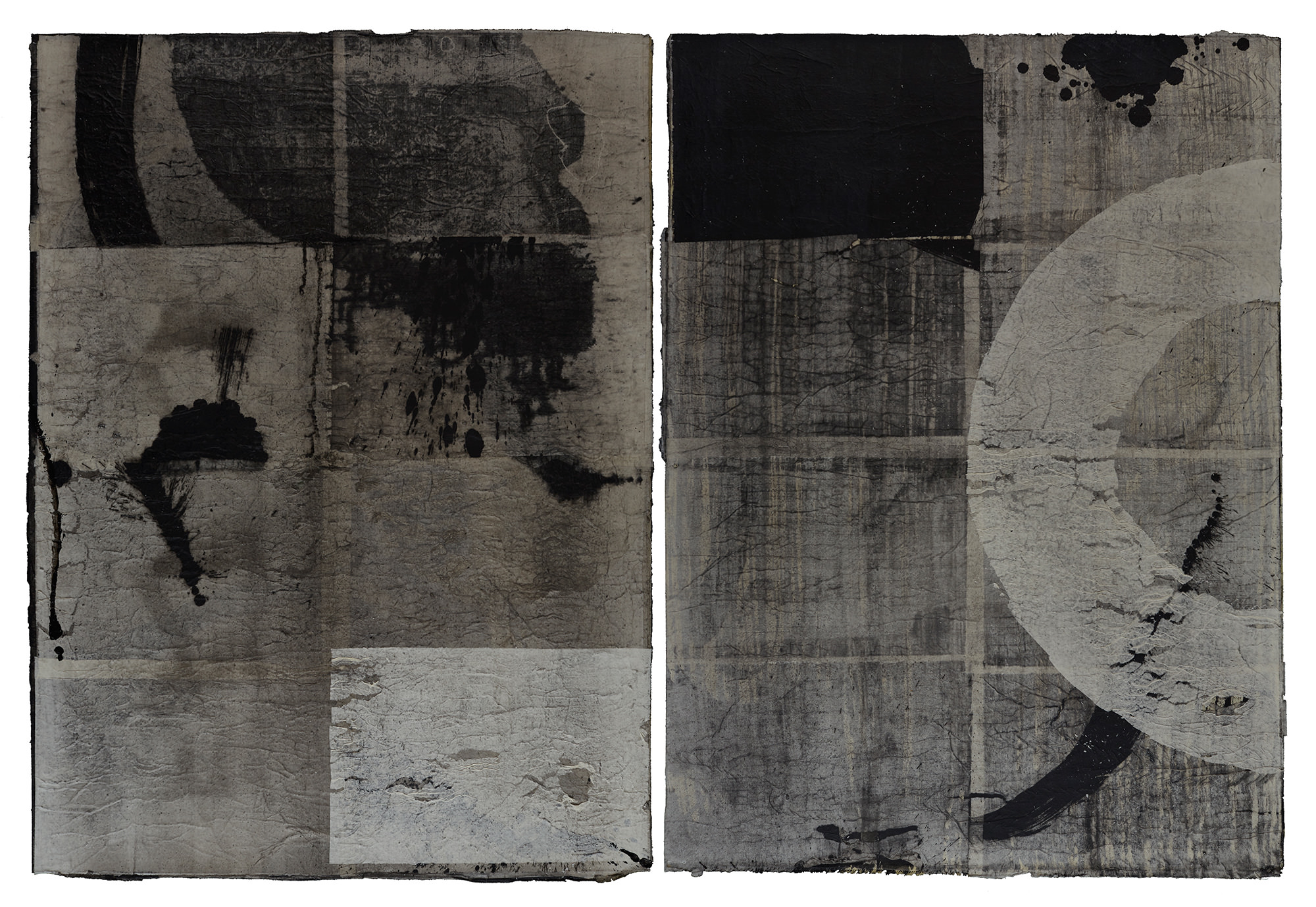